I’m sure a lot of women/young girls who are being encouraged to take up amateur radio think of it as an “old man’s” hobby.  And while it’s true that men are the majority of licensed ham, or amateur, radio operators, it isn’t a hobby for men only.

Women make up 15% of all licensed amateur operators in the United States.

With approximately 700,000 licensed ham radio operators in the United States, only 105,000 women are licensed to operate.  While it seems cool to be a part of a rare breed, it’s a shame that more women or young girls aren’t taking part in this fun hobby.  Besides, when men hear a woman’s voice over the radio, it tends to pique their interest. Women who take part in radio contests can score points faster because men will flock to them quicker than they would another man.

Today’s modern feminist movement gives us the impression that early 20th century women never had the opportunity nor the intelligence to do the same things men could do.  But that’s not the case.

Women in the early years of amateur radio took up the hobby, not only for communicating, but to build their own radios. For example, Kathleen Parkin who built her own rig at the age of 15 years old. Then there were those who took jobs on ocean liners or steamships as wireless operators. Graynella Packer was the youngest woman to ever hold that position.  Check out this article and this one to read more about women amateur operators in the early 20th century.

There’s hope that young girls will develop an interest in amateur radio with the STEM initiative (Science, Technology, Engineering, and Math).  This hobby is about more than talking on the radio. 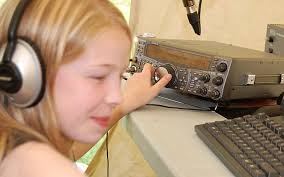 Diana Eng, New York fashion designer and a contestant on Project Runway in its second season, is an amateur operator.  Her interests include building her own antennas for the purpose of making contact with satellites.  She gets to work her radio and make new contacts with her travels around the world.  Click here to read about Diana and some of the projects that she’s done within amateur radio.

Diana Eng, pictured above, with her satellite tracking antenna.

Learning new skills such as soldering while building radios and antennas is another aspect to this hobby.  You can find any number of tutorials online showing you how to build your own radio with various materials.  There’s one tutorial for making a solar powered radio out of an Altoids Mints tin (see this link for instructions on how to make this radio).  Or, maybe you can build a homemade antenna?  There’s a gold mine of tutorials on the internet for building antennas out of things you may already have around your home like the Tape Measure Antenna (see here for instructions on how to build your own Tape Measure Antenna).  You can also get an old TV antenna and, with a few modifications, make your own radio antenna (Click here for instructions on how to modify an old TV antenna for radio use).

A woman can easily feel out of place in this male-dominated hobby.  It’s not uncommon for some (not all) men to, not so much look down on women operators, but think they don’t have the intelligence to understand the complexities of amateur radio.  I’m the first to admit, looking at electronic schematics of a radio or detailed drawings or graphs for antennas, I get the “deer in the headlights” look.  But, that shouldn’t be the assumption for all women.

Besides joining the ARRL (American Radio Relay League), joining one or more radio clubs for women amateur operators is a good idea.

One such group is the YLs.  Any licensed female operator, no matter her age, is called a YL, which stands for Young Lady (while a male, no matter what age, is called Old Man).  Another group is SOAR, which stands for Sisterhood Of Amateur Radio.  There could be more out there, but these are the two I’m familiar with.  These groups are there to help women/young ladies to learn and grow in this hobby with other women.

One hobby, many uses.

As I mentioned earlier, there are those who get into amateur radio for purposes other than communication.  While I respect those who can build their own rig (radio) and antennas, my intended purpose for getting into amateur radio is for providing communications during special events, whether it’s 5K races or the Cheaha Challenge Bike Race held here every May, or to help out during times of natural disasters, like tornadoes, and other emergencies.  I also learned about on-air special events, such as the 50th Anniversary of The Johnson Space Flight Center where I made contact with their radio group. There’s also contesting, but my main focus in amateur radio is community support.

The importance and value of amateur radio is getting noticed by government and community leaders.  It was ham radio that became the sole method of communication after the World Trade Center collapsed because it was home to many communications towers and antennas.  Cell towers became overloaded and bogged down, so many people couldn’t get in touch with loved ones.

It was ham radio that provided communications during Hurricane Katrina to get first responders to where they needed to be to help save people.  We also saw how ham radio became an important service in Puerto Rico last year after the island was ravaged during Hurricane Maria and knocked out most, if not all, of their communications.  Amateur radio allowed many on the mainland to contact their loved ones on the island.

So, ladies, if building rigs and antennas aren’t your thing (or maybe it is), and you don’t care for contesting or special events, you can still be a part of a very vital and valuable service to your community during times of natural disasters and other emergencies.  Who knows if/when the next storm will knock out all cell, landline, and internet communications?  If that happens, ham radio is the ONLY form of wireless communication that will still work.  All you need is a radio, antenna, a battery box, and BOOM!!!…..you have communications.  And if you’re a mother, what mom doesn’t want to know the status of their loved ones should they be separated due to work and/or school during a tornado or some other emergency?

I am 49 years old and I live in the Heart of Dixie (Alabama). I am married and am a Christian. I belong to a Reformed Baptist Church which adheres to the Doctrines of Grace teachings. View all posts by Susan Campbell

3 thoughts on “Women and Amateur Radio”